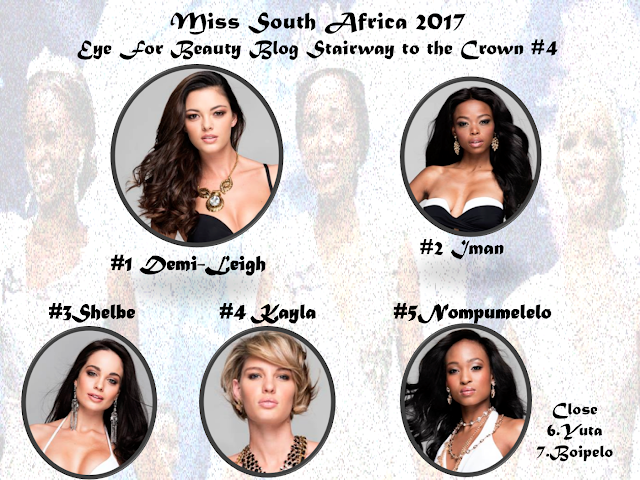 Our judges have cast their votes in three voting rounds and the voting has now been closed. Twenty one judges from all around the world cast their votes for the top 5 of Miss South Africa 2017. Thirty six sets of votes were received in total. Here are the combined scores of the three rounds of competition.

Leading the way by a mile is DEMI-LEIGH NEL-PETERS who received 136 points in total. In second place with exactly half of Demi-Leigh's total is IMAN MWKWANAZI with 68 points. SHELBE PRETORIUS (65 points) got the third highest score from our judges. KAYLA MALHERBE (61 points) and NOMPUMELELO MAMPHOLO (57 points) rounded out our top 5.

Thanks to our judges for following the competition closely and sending in their votes.

Our final Stairway to the Crown will be released early next week. Our panel of experts combined scores will be combined and will count for 70% of the final leaderboard's score. I will cast my votes after my "If I were a judge: Miss South Africa 2017" post and this will make up for the remaining 30%.