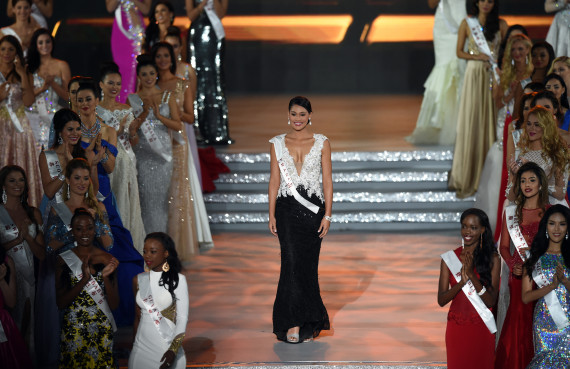 What was meant to be one of the highlights of the night, turned into such a rushed affair that it was painful to watch. The girls worked for an entire month for an announcement that saw them barely getting a moment of camera time. While parts of the show dragged on, one of the most crucial parts was rushed to the extent where you could not even enjoy it. Is Miss World even a pageant anymore? This is very sad, because these girls deserved more than a moment. After months of hard work, loads of time and money, they basically had to run down the stairs to go and take their places. Fast paced is one thing, a mad rush is another.

This was more exciting than the top 20 announcement, but honestly now... How was this cut made with just one commercial break in between. And it's like they just rearrange a few positions on the leaderboard (predetermined) to try and feign suspense. Who is going to believe that? Just because pageants are branded as superficial, it does not mean that most people who follow pageants are devoid of intelligence. Despite the fact that they really made an effort to make the top 10 announcement more suspenseful and exciting to watch, it still is nothing new... 2002, 2011, etc. At least it's not a train wreck. I do like the People's Choice Award, but it seemed like the rules were misleading this year as many people thought the winner would receive direct entry to the top 5. I saw a lot of angry comment from Vietnam, but I am not sure if the rules actually did say the winner would reach the top 5 or something more cryptic.

Now, once again, the biggest event in beauty apparently and this is the best they could do! What the hell was that song? It was horrible! What could potentially have been a beautiful moment with the top 10 finally getting a walk turned out to be wannabe copy of the Miss Universe final look. I do like the idea, but I felt bad for the top 10 that they had to walk out on such a horrible song. At least it felt like there was some sort of chance for them to show the judges their stage presence.

I have nothing but praise for Rolene Strauss... her beauty, her grace, her elegance, her sincerity. And it was the same again on the night. She was so gracious and her farewell speech echoed that. I will write more about this later, but I seriously feel she did not get the reign she deserved. She was wasted as Miss World. They had one of the most beautiful winners of all times and they for the greatest part of her reign, they did not even make her visible. I am actually relieved that she is free so she can be fulfil her destiny.
The tribute video was lovely. Not because they put so much effort into it or because they had decent footage to include, it was beautiful because she is so lovely and beautiful that she does not need any of that to look amazing.
Rolene's speech was touching and heartfelt. Not even the terrible sound issues could ruin the power of her speech.

DANCES OF THE WORLD 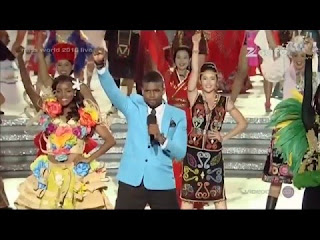 As I mentioned before, I never really appreciated Dances of the World, but this year it felt festive and alive. I liked the performer and I liked the music. I liked the energy. I saw that they also used it to get the contestants back on stage for the finals as they were in their national costumes this year when the winner was announced. Once again, they had to just repeat something, but at least they used something that worked. Smart choice even though I do not know how I feel about girls being in their national costumes when the winner is crowned. 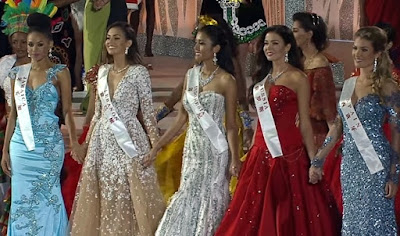 The videos were tasteful and done rather well. They were touching, emotional and heartwarming. I wonder, though, do they really make these videos of all the girls to be shown, or do they choose a select few to film in the days preceding the final indicating to those girls that they are the crown contenders. Food for thought.
It made sense I guess that they asked the girls again why they should be the next Miss World as a) it's essentially a job interview and b) it's clear that the winner has already been decided by this point as no judging was actually done. During Indonesia's speech they did show a glimpse of her national director on the judging panel, something which should probably have not been made so obvious. And it was disappointing to even see a judge on their phone while a contestant was speaking. It's a bit disrespectful and really gives the impression that it's just done to give the impression that there was actually a competition on the final night... that a girl could still come out and prove to the judges that she is the one who should be Miss World. 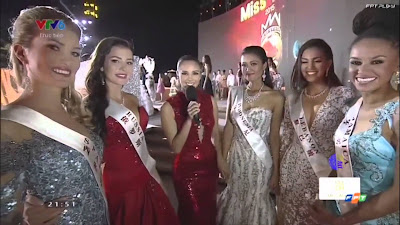 Another technical error occurred just before the final walk. Angela Chow was shown, apparently ready to interview two people... a contestant's parents?! Or family? But they also showed Megan Young talking to the girls. I could still hear Angela before she was cut off and it was Megan who interviewed the girls in the end.

FINAL WALK OF THE TOP 5
This moment is always nice. I do generally like crowning of Miss World as it is always very dignified, elegant and royal. It's too bad that Miss Lebanon's name was not called by Tim Vincent. Did they forget about her or did his mike cut out? Either way, after an evening of technical errors, this was just another one. 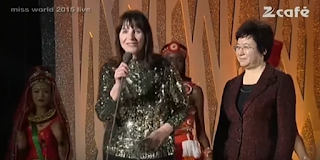 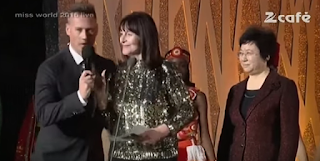 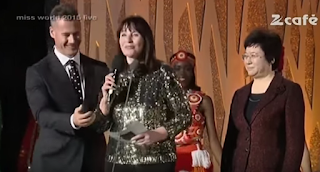 I love the crowning of Miss World. I think they do have that right. But there was time for one last technical error when Julia's mike did not work in the audience, but incidentally the feed to the television audience was (in a reverse of the night's actual events with regard to te telecast) perfectly clear. And just before the surprise victory of the 65th Miss World, Julia's banging on the apparently dead microphone not only was another mishap that should not have happened, it can also be seen as a symbolic tale of the events that unfolded. Maybe they should look at that moment again with the following dialogue/monologue in mind:
Julia thinking: "Is this thing even working?! Don't know but note to self: we can't let this happen again." 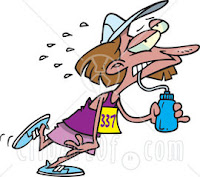 At 65,  (the) Miss World (Pageant) is really showing her age in more ways than one. Yes, she's not quite ready to give up. She wants to be young and fresh and there are brief moments when she does still show her youthful appearance with success... but more often than not, it's a case of mutton dressed up as lamb. An old lady trying with noticeable desperation to be young. Miss World has so so much potential. It made me sad that the 2015 edition (telecast, month, everything) was always like an athlete who was not trained properly: starting out full steam, but running out of steam pretty quickly, never giving up though, just to make a spirited attempt to limp across the finish line as gracefully as possible despite not even being close to being a winner. Will the athlete learn from this and starting training hard now for the next marathon? We certainly hope so, but only time will tell.

*** DISCLAIMER: Everything that is written in this three part telecast review is purely the opinion of the blogger. I have no association with the Miss World Organization and these are just my observations/musings/opinions. ***