The actual telecast intro looked promising, even though I picked up some sound issues again, but at least it looked modern.

The opening itself was colorful, energetic and well-produced. It started the whole thing off with a feeling of excitement, something that was much needed after the pre-show. I have seen the same kind of opening in previous editions from China, but this one had energy and color. It dragged on a little bit too long and kind of like the whole telecast, it ran out of steam midway through, but made it to the end.

GIRLS INTRO:
The girls came out and it looked better on television than what we saw because we had no screens to watch any of the action on. In the past they have had major issues with cameramen missing their cues and the girls even losing their 1 second of airtime, so I guess they have no decided to bring them out two by two to avoid missing cues or to make 114 introductions a bit faster. I actually thought it was a good idea at first, but as the introductions went on it seemed like they became faster and faster and the timing was so off. After weeks of rehearsals, this is just not acceptable for a major production. It's still not the right formula and this remains a major problem for them. (Notice how windy it is too... that was the only negative aspect of the outdoor production. It was not too distracting though.)

Just like the introductions, the music felt rushed too. The 2014 music felt regal and royal and this year the carnival music did not quite work. It did not add to the energy nor did it feel elegant. If anything, it added to the feeling of the whole business being rushed. 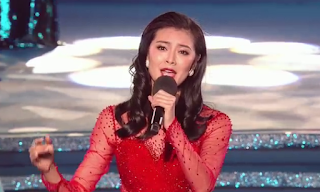 Wenxia Yu was brought on to bring the pace down after what felt like the last few girls running down the stage to make their introductions. She looked beautiful and has a great voice, but I still think this was a waste of time. I mean having a former Miss World singing is great, but maybe they could have shown highlights of the BWAP work during that song. People do not want to watch a variety show and awards ceremony, they want to see a pageant. The Miss World organizers forgot that years ago and still no one has bothered to make them see the light again.

THE HOSTS
I actually love the three hosts. Tim Vincent was trying his best. I would not mind seeing him as a host again... but I would not mind not seeing him either. It was nice to have Angela Chow back after a much needed hiatus. She is a seasoned pro and can come back every second year. Megan Young is amazing. She is just so great to look at and her personality is so likeable. Yes to Megan Young! Yes! Yes! Yes! Steve Douglas - well, as part of the organization, he won't go anywhere and he has improved, but he still moves around a bit too much. He did save Tim Vincent a time or two when things went through. If he continues as the leaderboard expert, maybe it would be nice to have him sitting somewhere and have him paired up with a former winner too, like Lisa Hanna, Diana Hayden, Azra Akin, or Kaiane Aldorino. (I actually wanted to say Priyanka Chopra or Aishwariya Rai but they will not be able to afford them.) There must be a way to make the leaderboard even more interesting (I like it already) with some tidbits, like the good old color commentary days.

Now it seemed like Tim Vincent knew he was going to mess it up from the start as he started with an apology. After several rehearsals, he still did not get it right. It's good a thing all the former Miss Worlds (Linda Petursdottir, please show me where the fountain of youth is!) looked so amazing, because that took people's attention off the fact that he butchered the names. Ksenia and Agabani both looked rather bemused when he totally killed their names. And then, who can forget, the longest and most awkward pause ever. It was not TV gold at all. It was a TV tragedy. It was soooo awkward and cringe worthy. (There was something going on with the prompter, the cue cards, and Tim Vincent was NOT a happy man when he returned to the stage.) 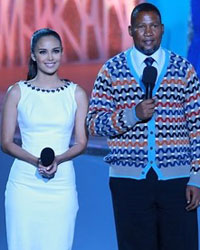 The interview segment was well produced. It was real and showed some real emotion and you could tell this was an important moment in the girls' lives. So I do wonder if it was as stressful for them as I heard that they only got a few seconds each to talk during their "interviews".  I am not sure how you can even determine an interview winner in just a matter of 20 to 30 seconds. I miss the good old days of one on one interviews, but I guess after a month the organization members and the judges already know the girls well.

Sanya and the Beauty Crown was made to look AMAZING in the inserts. Much better than in real life. Miss World did their bit for tourism indeed.

I had seen the challenge event inserts in the first bit, so seeing the shortened versions in the main telecast was just a case of same old, same old. I am also starting to think that the fast track inserts might make Miss World look like a girl scout camp instead of a pageant. They really have to rethink the whole flow of the show.

The Beauty With A Purpose segment is important. It showcases the good work of Miss World. It dragged on a bit and could have been split in two parts, maybe clips showing during Wenxia's performance. Miss World is/was my favorite pageant due to BWAP, but we must remember it's a television production first and foremost, too, and not all viewers want to see such a long insert. It must stay though as it is the heart and soul of Miss World.

Watching the announcements, the only thing that came to mind was that a lot of the show seemed unrehearsed which I don't get because I know they rehearsed. The contestants did not know when to step forward, the camera work was not smooth. Same old, same old. I wonder if the organization takes a look at their show, well a critical look at it. Sometimes it seems like they don't.

They invited Mandla Mandela back for the BWAP announcement. The Mandela name is still quite powerful and holds a lot of clout, so it's a win for the organization. Mandla Mandela is quite a controversial figure in South Africa, but internationally it looks good to have the Mandela name associated with Miss World. Mandela did seem to miss his cue and the winner was introduced by Megan Young. I don't know if that was planned, but it did not really look like it. A very worthy project won though. 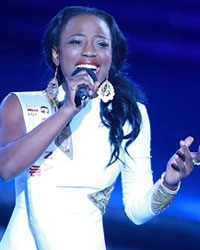 Miss Guyana, Lisa Punch, sure did sing for her supper... or is that her top ten placement? She did well though. The girl has a beautiful voice and I really hope this gives her career a boost. She deserves it. I wasn't crazy about the song, but her voice was really good.
Posted by Andre at 7:32 PM