Watching a pageant as an audience member is quite different from watching it on television. Pageants are essentially produced for television as it's part of showbiz. Miss World 2015 was no exception, but when I watched the live telecast, I battled through it. The show was marred by technical glitches and sound problems. I watched the pageant yesterday to do my review of the telecast, but I had to stop several times because it was not riveting viewing at all. It's a shame, because it's billed as the biggest event in beauty, but at times it seemed like it was done with the smallest budget in beauty. Here are my thoughts about the Miss World 2015 telecast.

Well, first of all, unlike the last few editions, this Miss World was not streamed on youtube or missworld.com. I suspect that China's internet censorship had something to do with it. I believe they streamed it on some Chinese app, Alipay presumably, but I do hope they (at least) got a paying Chinese broadcaster because the show was very accommodating to the Chinese audience with lots of Chinese translation throughout the show.

In the last few years, the Miss World telecast has been packaged as either a 2.5 hour show or just the main 2 hour telecast. What could be a nice buildup to the main show usually ends up quite boring, unfortunately, and if it's followed by a bit of a sleepy show, then they will never recover from the "cooking show" and "borefest" labels that usually dominate the pageant forums following the telecast. I want nothing more than an exciting Miss World telecast, so I am really hoping that one day they will realize that it would make good sense to freshen it up and get a big name production company to revamp the whole thing. For heaven's sake, please just watch Miss America, Miss France, Miss South Africa or even Miss Grand International or Supranational. That's if you want to compete with Miss Universe, a telecast that pretty much kickboxes its competitors into a different realm every year, even in weak years.

We saw 3 hours in the audience, but I'm not sure if that was just for the app. I am already uncertain if any broadcasters will keep buying the 2.5 hour package as a lot of inserts seem to be repetitive. I struggled through the Zee TV telecast and a Vietnamese channel's coverage with voice overs to do this review. I tried to be objective, because the fact that I have been one of the most ardent Miss World fans for 24 years sometimes lets me go soft, but I guess my experience this year also made me realize I'm not as much of a super fan as I imagined myself to be... or in blunt terms... I'm no VIP at Miss World... just a regular pageant crazy who flocks to the show. A dime a dozen for massive pageants like Miss World (but not for much longer if you don't treat us with respect)!

OPENING OF THE PRE-SHOW

I found the opening rather awkward as it started with the 3 hosts and Tim Vincent introducing a segment while Megan Young and Angela Chow just acted as eye candy. They both looked stunning though, especially Megan.

And then immediately there was an insert about the Beauty Crown and Sanya welcome. The inserts, in general, had a modern and fresh feel to it, most of the time much more modern and fresh than the actual telecast. Can't they just make both the inserts and the telecast modern and fresh. In the telecast that I watched, there were some serious sound issues. I don't know if this is from the broadcaster's side, or from the feed from Sanya. Regardless, a broadcast of this magnitude should not experience such technical errors. It's quite inexcusable in this day and age. (I did notice that the opening ceremony performance actually matched the telecast opening. Lazy or Smart?) 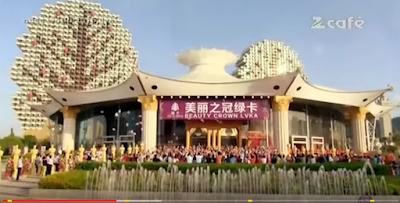 My general feel is that the pace was too sleepy. It has no energy and there were just too many inserts. I think last year they at least tried to make it a bit more interesting with Frankie Cena and Megan trying to link it together. Also, partnering with AliPay made sense for China, but not so much for the rest of the world. Who even uses Alipay? I am in China and it's hard to use if you are not Chinese.

I must say that the stage and the venue looked great on television. It looked good in the audience and it looked good on television. Well done for that. Whoever decided to do the show outside with the Beauty Crown as a backdrop made a great decision.

The most important thing that I missed from the first part of the show is EXCITEMENT. Well, the same goes for the rest of the show, but at least there was more excitement in the actual telecast. I have to reiterate that I have real issues with it when they call themselve the biggest event in beauty or beauty's biggest night or claim it will be the most spectacular show ever (yearly promise) and there's nothing exciting or new about it. And from what I read all over the internet, I'm not the only one that feels that way. I am just one of MANY people that feel this way.

OVERPROMISE and UNDERDELIVER is a massive no-no! Especially in today's television age!
Posted by Andre at 6:17 PM