The Stage is Set for a New Miss World 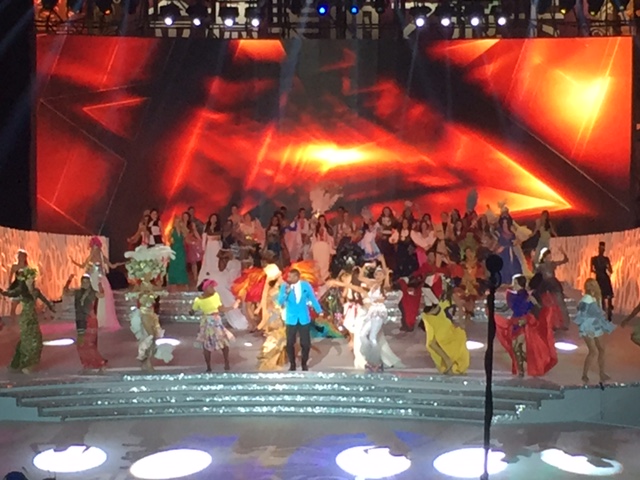 All dressed up and ready to go, I headed down to the lobby of my hotel. The final of Miss World 2015 was just hours away and I had managed to let go of the day’s unpleasant events. I was still hoping to meet the outgoing Miss World, Rolene Strauss, but it seemed like hope was fading fast. She would be so busy before and after the event and I would not attend the coronation ball. At this point, I had pretty much let go of all my expectations and just decided to go with the flow until I could leave the following day.

A short taxi ride later, I was at the Beauty Crown theater and this time things went more smoothly. My friend was waiting for me and we entered without any problems. We headed straight to the place where we were supposed to get our tickets. The staff were there handing out tickets and we got ours. They were pretty much handed out randomly. Now, I am most grateful for these free tickets, but I definitely would suggest that they rather sell tickets and allow people to choose their own seats. 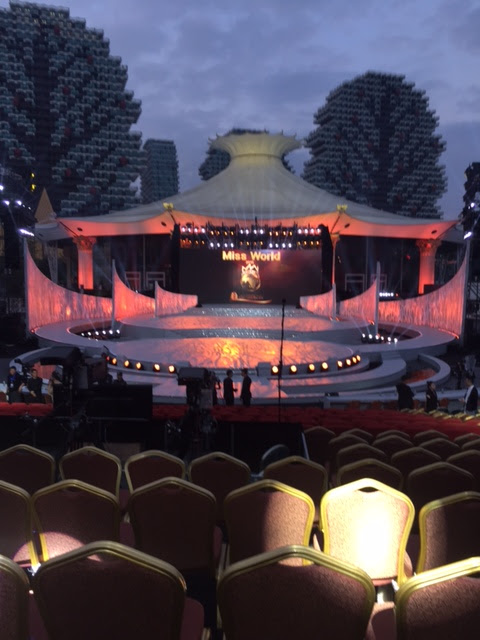 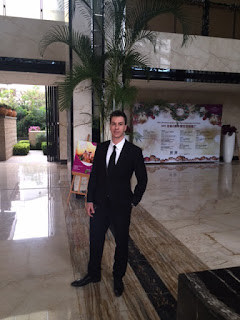 We stood around for a bit and walked around in the hotel. The coronation gala would be held in the same opulent hall where the welcome ceremony was held. It was definitely a grand hall that screamed wannabe Europe. Copying European opulence is done rather well in Asia, I must say. There was a festive mood in the air. Directors were wishing each other well and it was really lovely to see as it was clear that they saw each other in the same light: as part of the Miss World family.

I had only found out a few hours earlier that it would actually be an outdoor event and I was surprised as it seemed to be a risky choice. What if Mother Nature did not play along?! As we entered the makeshift “arena” where the pageant was held, my mouth dropped open. It looked amazing. The stage looked fantastic and the Beauty Crown and hotel complex made a perfect backdrop for it all. It reminded me of some of my favorite Miss World stages – Seychelles 98, London 2002 and Ordos 2012. The stage and the surrounding structures that complemented it just looked absolutely fantastic. At this point it seemed like the yearly promise of “It will be the most spectacular Miss World ever” was actually going to come true this year and I was (cautiously) anticipating an amazing show. 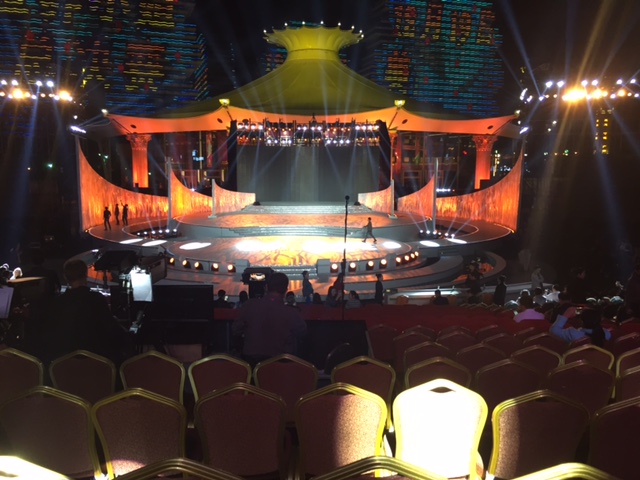 We took our seats and I got to chat to some of the people around me. That was definitely another highlight. Everyone was there to celebrate the crowning of a new Miss World and it reminded me of why I love pageants. Meeting the directors of the Miss Tunisia Pageant was a highlight. It’s always nice to meet fellow Africans. I felt touched by how passionately they spoke about their girl’s BWAP project. I had read about her project on the way to Sanya and I am still surprised that such a worthy project did not even get shortlisted. I was happy to share with them that the girl who represented them in Sanya (she was not the original winner of Miss Tunisia) was actually my favorite for the crown. They were absolutely delightful people and I do hope there will be a breakthrough for them soon.

I was surprised that the “arena” seemed quite empty. Actually, after having to go through the ordeal of getting tickets, it should not have been that surprising. I reckoned that it would be half empty. But then, all at once, loads and loads of local audience members came in. Suddenly it dawned on me that the Miss World Organization probably had very little control over the ticket situation... That they could only reserve tickets for the international part and that the host organization had full control of the rest of the ticket arrangements. It made perfect sense, yet it should not serve as an excuse. I just reminded myself to be grateful that I was there and that the tickets were free. It was actually nice that they left snacks, water and coconut juice on the chairs for each guest… and a plastic raincoat. I guess that was the contingency plan in case there was bad weather.

There was some cheering, mostly from the Filipino and Latin groups, but there was definitely a Miss World atmosphere in the air. I think the whole outdoor vibe felt great. It just felt more alive and buzzing than the previous Miss World finals I attended. Julia Morley entered to some cheers and I watched her greet some friends with hugs. She took her place at the judges’ table and spoke to her formers. I could not really see what was going on, but I was super excited at this point. Steve Douglas asked the audience to sit down as the pretaping of Dances of the World would start and asked the international and Chinese audiences to greet each other with “Ni Hao Sanya, Ni Hao World”. The local audience members all around us were super busy feasting on their snacks and taking selfies. It was quite comical. 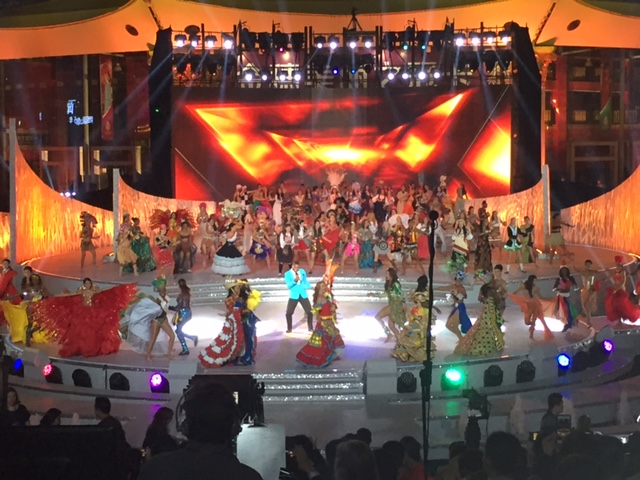 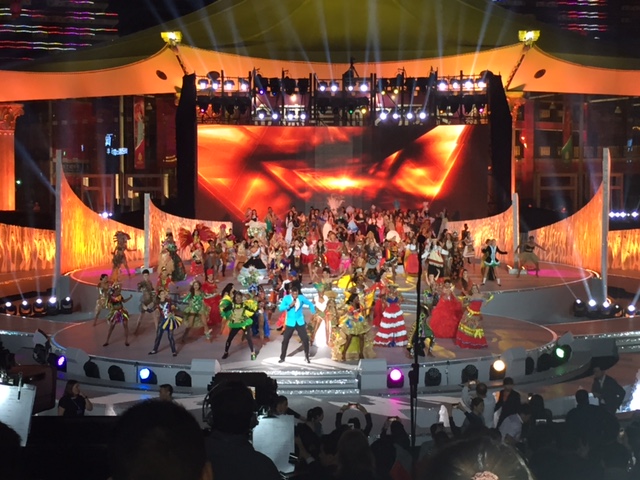 The music started and Dances With the World commenced. Now, I have never been a fan of this segment and I can’t exactly describe why, but this year I got it.  I think it was because the last time I was there it was pretaped the night before. It was great to see it live on stage. I loved all the colors and music. I get it now. Kudos to the girls and organization for the hard work and effort they put into it. It was perfect the first time around. The evening was off to a great start and I was most impressed.

Angela Chow, looking lovely, entered and took her place on stage. Admittedly, I did grow tired of her hosting year after year, but it was nice to have her back on the Miss World stage. She is a seasoned professional and looked glamorous on stage. The show was about the start… or so I thought. No one really knew what was going on. It actually turned out to be the pre-show. Now here’s the thing, from the very beginning it seemed like it was going to be 30 minutes of promotional footage of the Beauty Crown. They obviously paid a lot of money to host the event, so I could understand it. We saw all the clips in Chinese. I do not even know if the western audience got the English feed and we got the Chinese feed. All I knew was that it was quite boring. After 30 minutes, I was excited because the show would start. Megan Young took her place on stage. She looked breathtakingly beautiful and absolutely perfect. She got loads of cheers and waved to the crowd. It was nice to see her nervously adjusting her dress and saying a short prayer shortly before the show started. Those are the beautiful things that tend to stick with you long after an event like this is over. 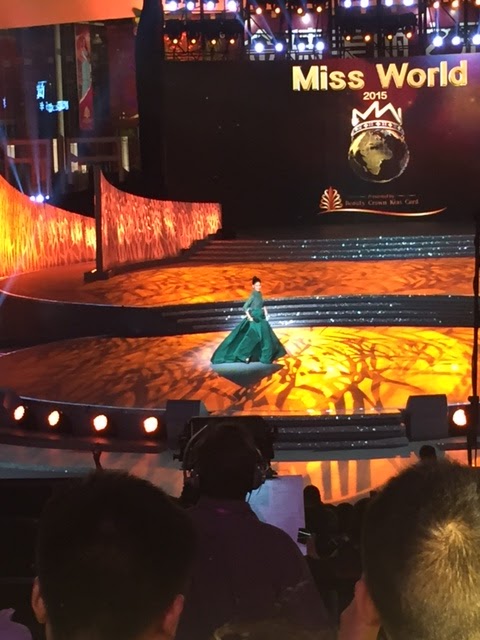 Actually, it soon turned out that it was not the real start of the show. It was another 30 minutes of inserts and a speech from the mayor of Sanya. The inserts were done well by Warren Batchelor and his team, but it felt like we were watching the same things over and over and over again. Everyone around me laughed at my reaction every time another insert started. The speech by the mayor left me dumbstruck. First of all, it was written on a piece of paper that was almost blown away by the wind and second of all he was reading it word for word. Hmmm… actually the most interesting thing I can highlight at this point was that it had become really windy. I need to check back to see what it looked like on television but I thought it was going to be quite a challenge for the girls to keep their hair and dresses in tact with these gusts of wind. The beautiful little fountains had been turned on and water was being blown all over the stage.  (They actually had staff come during the break to dry the water up with towels.) Honestly, for the life of me, I do not know which television station would pay for the extra hour as it was definitely not riveting viewing at all. In fact, I would think if viewers thought that was the Miss World show, they would probably turn their televisions off. There must be a more innovative way to showcase the venue and the girls. People want to watch a pageant, not an hour of Sanya. It was a long hour... a very, very, very long one.