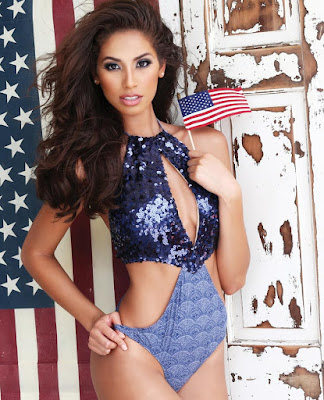 Miss Dominican Republic, Anea Garcia (20) from Cranston, Rhode Island, was crowned Miss Grand International 2015 in Bangkok, Thailand a short while ago. She is the third winner of the title and it's the third time in a row that a Caribbean sash won. Garcia was Miss Rhode Island USA 2015 and finished as the second runner-up to Miss USA 2015, Olivia Jordan.

The first runner-up was Australia's Claire Parker and the second runner-up was India's Vartika Singh, who was the favorite throughout the competition. Miss Philippines, Parul Shah, finished in fourth place while Miss Thailand, Rattikorn Kunsom, finished in fifth place.

The delegates from Sri Lanka (Public Vote), Brazil, Japan (Best in Evening Gown), Spain and Costa Rica (Best in Swimsuit) made it to the top ten. The top 20 were completed by the delegates from Poland, United States of America, Angola, France, Ukraine, Puerto Rico, Venezuela, Czech Republic, Netherlands and Mexico.