Trump to Miss Universe: You're... a hypocrite! 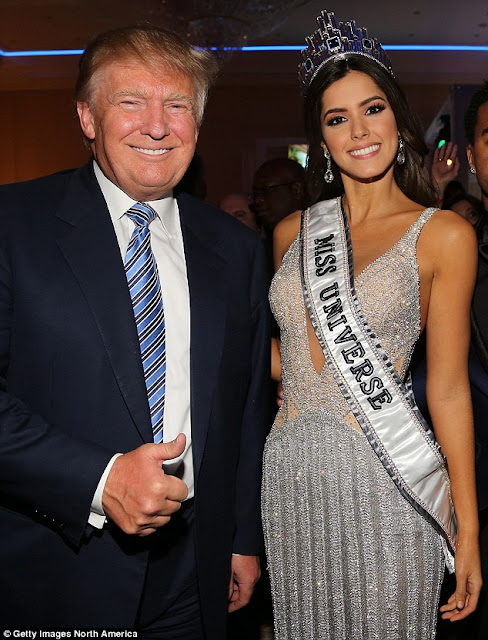 Donald Trump has slammed reigning Miss Universe Paulina Vega as a hypocrite for calling his controversial comments about Mexican immigrants 'hurtful and unfair' but refusing to step down - or relinquish her crown.
The Colombian beauty released a statement on Thursday that joined a chorus of condemnation against Trump  over his outspoken claim that 'rapists' and 'killers' are among illegal immigrants from Mexico.
Today Trump took to Twitter to have his say about Vega's comments, saying he was 'telling the truth about immigration' and denouncing the 2014 pageant winner as a 'hypocrite.


Vega said she didn't plan to resign her crown because the Miss Universe organization does meaningful social work in communities around the world.
Her comments coincided with calls from other Miss Universe contestants for Trump to be dumped from the competition.
Former Miss Colorado Marybel Gonzalez, who competed in 2012, said it was time to 'drop Trump' so that 'the spirit of the pageant will continue'.
Many Colombians were outraged by Trump's remarks, and the city government of Bogota withdrew its support for a bid to host the Miss Universe pageant.
Trump has been under fire since he began bashing Mexicans during his announcement seeking the Republican presidential nomination, saying they were bringing drugs and crime to the U.S.
Courtesy of:
http://www.dailymail.co.uk/news/article-3150063/Donald-Trump-hits-hypocrite-Miss-Universe-called-dumped-pageant-Mexican-insults-decided-crown.html
Univision, the world's largest Spanish-language network, announced it would not air the Miss USA pageant in light of his remarks.

Trump reportedly subsequently sued the company for $500 million.
NBC has also announced it would not air either the Miss Universe or Miss USA pageants.

Miss USA hosts Cheryl Burke and Thomas Roberts announced they would step down as hosts.
The pageant is to air July 11, but it's unclear who will host the show.
Macy's, which carried a Trump menswear line, also ended its relationship with the reality star and entrepreneur known as The Donald. The famous store released a statement saying: 'We have no tolerance for discrimination in any form,' according to CBS Los Angeles. Trump has been busy bashing Macy's on Twitter ever since.
Though he has somewhat backtracked on his remarks, he still remains unrepentant about his thoughts on Mexico in general, recently tweeting:
'We MUST have strong borders and stop illegal immigration. Without that we do not have a country. Also, Mexico is killing U.S. trade. WIN!'