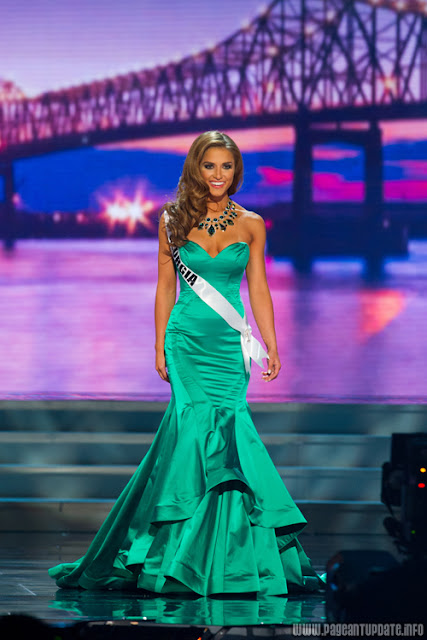 Brooke was Miss Georgia Teen USA and 1st runner-up to Miss Teen USA 2009. Now I had her as one of my favorites before the start of the pageant, but she kind of fizzled for me during the run-up to the preliminaries. Now don't get me wrong, I still had my eye on her, but I just expected a bit more from her. That was until the preliminaries when her pageant experience showed. She turned up the heat on stage and delivered when it mattered the most. I actually think she could do very well and in hindsight I probably underscored her. With a bit of luck, she could go all the way to the top 5. I just wish she was about 3 inches taller.  ] 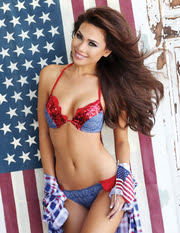 I did not take much notice of Emma before the start of the competition, but I am starting to change my mind. There's just something very likeable about her. This former Miss Hawaii Teen USA (2008) obviously has a lot of pageant experience and it showed during the preliminaries. She was fun and energetic during the swimsuit segment and she worked a very interesting gown. If she manages to squeeze into the top 15, I have a feeling that the panel of formers will like her. 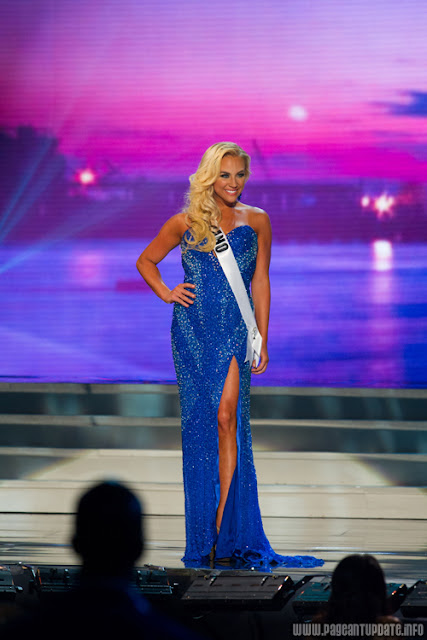 Claira was Miss Idaho Teen USA in 2011 and competed for the 2011 Miss Teen USA crown in the Bahamas. She did not make it to the top 15 at that pageant and it will be an uphill battle for her at this pageant too. It's quite a strong group and I think that she was outclassed by a number of other beauties. 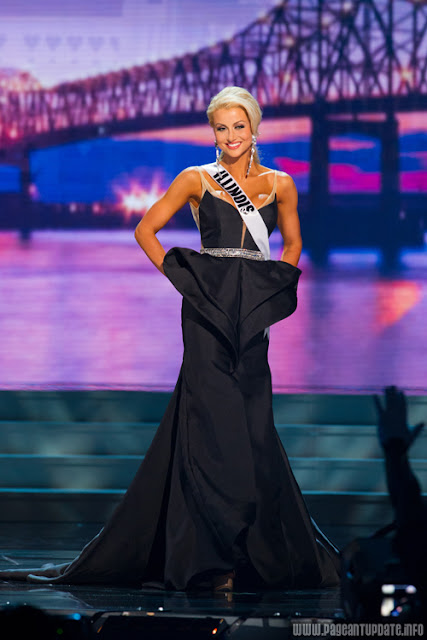 Renee is a tall and striking blonde and she's actually climbing up my list quite steadily. She was consistent throughout the competition and she had two solid preliminary performances. I actually applaud her for her evening gown choice. It was brave and different. I saw some mixed reactions to it, but I responded really well to the stunning and somewhat (for pageants) avant garde gown. I would not be surprised to see her go all the way to the top 10. 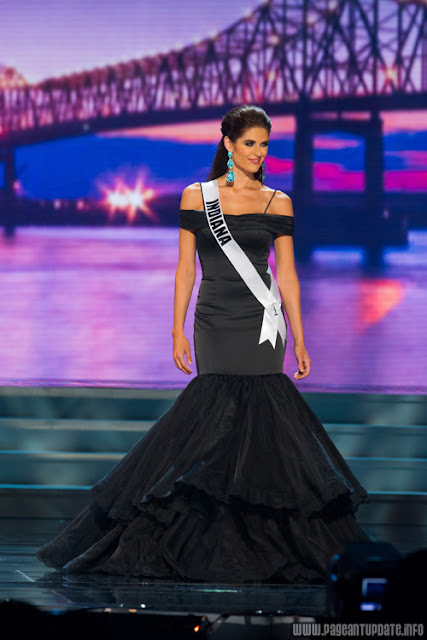 This girl must have the beautiful eyes in the competition. There's just something magnetic about them. It's like they draw you in. Now there's something old school beauty queen about her. She actually reminds me of some of the 80s and 90s queens and I mean that as a compliment. She was better in gown than swimsuit for me. I think she did a good job, but I wish she had turned on the heat even more. 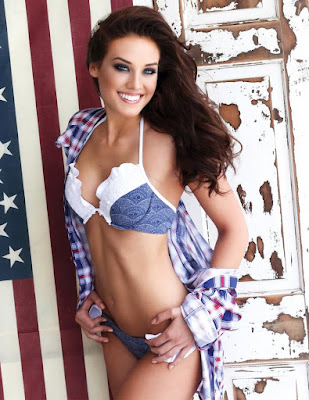 Taylor is pretty, but this is quite a strong group. I took notice of her, but she did not really "wow" me that much. She is also quite short which did not really help. I actually expected a bit more from her, but I loved her Fadil Berisha glamshot. I am also not sure about her gown choice for the evening gown round. It looks good in photos, but she almost seemed uncomfortable in it on stage. 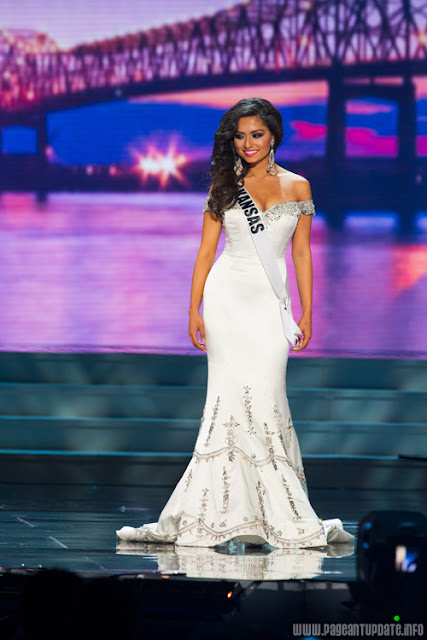 Alexis is the youngest contestant this year and also one of the shortest. I think she is relatively inexperienced when it comes to major pageants and it kind of showed. So, even though I think she presented herself really well, she was outshined by some of the more experienced delegates. She should probably have waited 2 or 3 years before competing on national level. 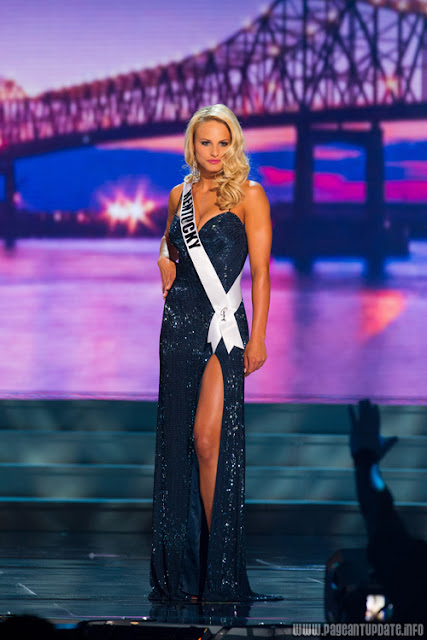 Katie is tall and has a very interesting look. In fact, a lot of pageant observers think she has a great shot at doing extremely well at this pageant. I am still on the fence. I mean I find her striking and there's definitely something to her, but I still have several other favorites who I favor more. With two solid performances in the preliminaries, a placement is within reach though. 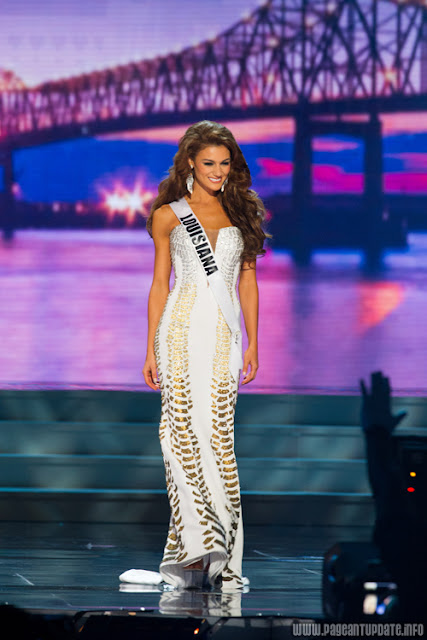 The home girl is coming in strong once again. Candice has been doing everything right and I am expecting her to do really well. I really enjoyed her interview and her southern warmth shines through, so I think she would have impressed the judges in the interview round. It's definitely hard to follow up someone like last year's winner, Brittany Guidry, but she's definitely not daunted by her mission. At times, she actually reminds me of Ali Landry. She was strong in swimsuit and gown and I loved her choice of evening gown. Could the home girl take it all? Yes, she could. 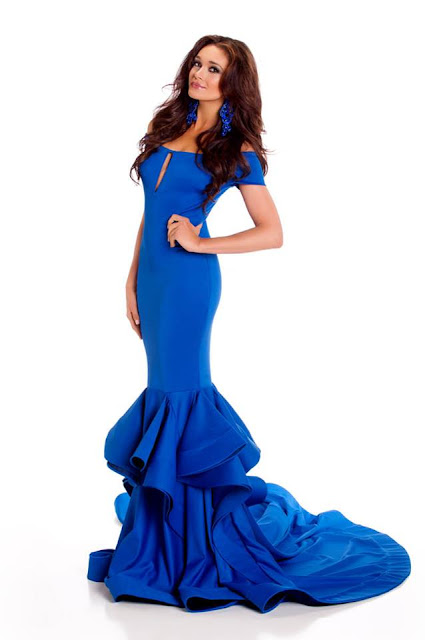 Heather just oozes sex appeal and she actually started catching my eye when the girls arrived in Louisiana. When I saw her official photos, there was something Angelina Jolie-esque about them. But at the same time, I am missing some spark. She was better in gown than swimsuit for me, but I was expecting a bit more from her to be honest. She could still sneak into the top 15 though.

Photos courtesy of Miss Universe Organization and www.pageantupdate.info
Posted by Andre at 9:09 AM