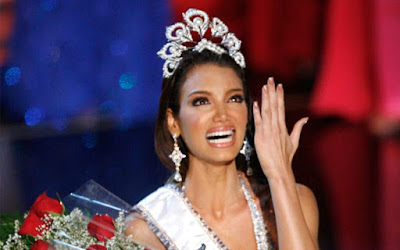 Latinos that were supposed to be part of Miss USA 2015 are continuing to drop. Following Univision's announcement that they would not air the Spanish simulcast of beauty pageant next month, hosts Cristián De La Fuente and Roselyn Sanchez also quit their hosting duties and J Balvin also opted out of performing on-stage. Now, one of the judges set to take part in the main event has opted out of participating. Zuleyka Rivera, who won Miss Universe in 2008 representing Puerto Rico, has decided not to partake in the telecast. "With the responsibility and firmness that has always characterized me, I'm announcing that I have canceled my participation as judge at the Miss USA 2015 event," reads the statement posted on Twitter. "As a Latina, I don't agree with the comments made by Mr. Donald Trump referring to our Mexican brothers."

"We all have the same flag in this country, that of Latinos," she continued. "I would always be eternally grateful for the grand opportunity that I had of being elected as Miss Universe and represent my island of Puerto Rico around the world. I am very surprised with this situation as I worked a whole year with the Miss Universe Organization and I never suffered any type of discrimination. Nevertheless, today I had to express my feelings about this sad incident that affects all Hispanics." See original tweet down below! As of now, NBC will continue to air the beauty pageant, but issued a statement distancing itself from Donald Trump. “Donald Trump’s opinions do not represent those of NBC," the peacock network said in a statement posted by Deadline. "We do not agree with his positions on a number of issues, including his recent comments on immigration."

Univision released a statement taking a stand against Mr. Trump's horrendous comments against Mexican immigrants: "Today the entertainment division of Univision Communications Inc. announced that it is ending the Company’s business relationship with the Miss Universe Organization, which is part-owned by Donald J. Trump, based on his recent, insulting remarks about Mexican immigrants. At Univision we see first-hand the work ethic, love for family, strong religious values and the important role Mexican immigrants and Mexican-Americans have had and will continue to have in building the future of our country. We will not be airing the Miss USA pageant on July 12th or working on any other projects tied to the Trump Organization. Univision News and the local news division will continue to provide comprehensive coverage of all candidates, including Mr. Trump, to ensure our audience continues to have access to all points of view."