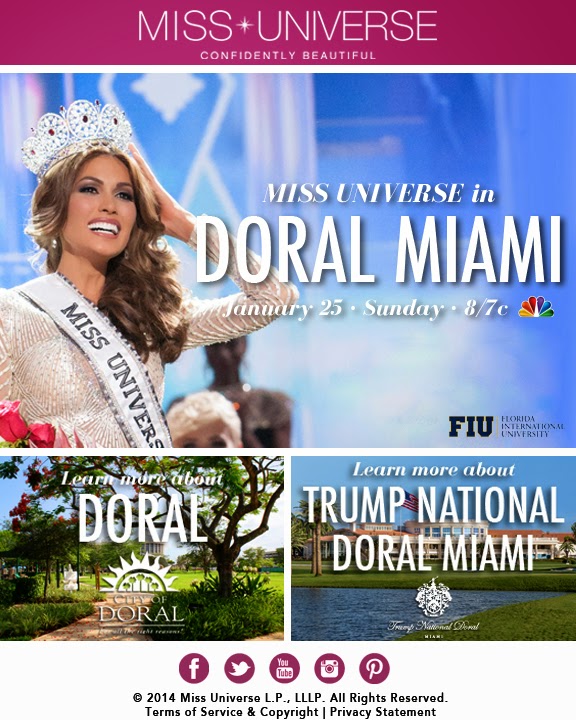 "The City of Doral is experiencing a record amount of economic growth and has gained attention from Fortune 100 companies in the short time since its incorporation in 2003," says Trump. "In its 11 years of being an established city, Doral has become internationally recognized for its outstanding commercial and industrial accomplishments," adds Trump. "Doral is a symbol of success and holding the Miss Universe Pageant here will amplify its reputation as a world showcase city."
"Even as one of the newest cities in Miami, Doral is a premier place to live, work, and play due to its beautiful lifestyle and entrepreneurial opportunities," says Shugart. "Since the Greater Miami area is a melting pot of people from all over the world, our contestants will feel right at home as they showcase what the area has to offer," adds Shugart. "I cannot think of a better backdrop in January than sunny Miami for our global telecast."
"The Miss Universe Pageant offers an unprecedented opportunity to showcase the city to millions of viewers, as well as expose our local shops, hotels, restaurants, and attractions to thousands of visitors," says Mayor Luigi Boria. "Our local economy will be greatly benefited by our partnership with the pageant," adds Boria. "Our international presence will be improved further by joining the list of select cities that have hosted this prestigious competition." 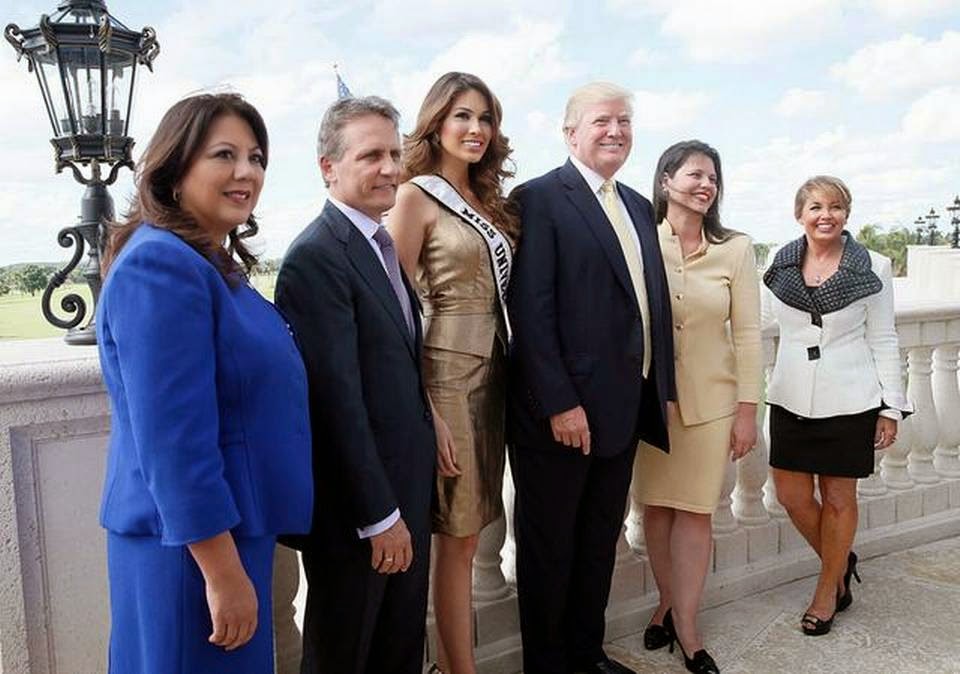 In its short existence, the City of Doral has become a mecca for business development and expansion. Exceeding national trends, Doral has a flourishing economy and has gained status as the premier place for trade and commerce. In just five years after its inception, Doral was named one of the "100 Best Cities to Live and Launch a Business" by CNNMoney.com, coming in at number two in the State of Florida. The city's geographical location, with proximity to the airport, seaport and major transit arteries, provides Doral with unique advantages for growth. The government climate of the multi-cultural, multi-lingual population from South and Central America gives Doral a cosmopolitan, eclectic ambiance that entices shoppers, businesses and industries from around the world.
The pageant will be broadcast from the FIU Arena on the campus of Florida International University. FIU is the public research university in Miami and graduates more Hispanic students than any other university in the nation.
"Our students will gain valuable insight from this opportunity to intern with, and learn from, this world class event," said FIU president, Mark B. Rosenberg. "I'm delighted that having the pageant on campus will also make it possible for our first generation students to receive scholarships and young people all over the world to be exposed to FIU."
Florida International University is recognized as a Carnegie engaged university. It is a public research university with colleges and schools that offers more than 180 bachelor's, master's and doctoral programs in fields such as engineering, international relations, architecture, law and medicine. As one of South Florida's anchor institutions, FIU contributes $9.8 billion each year to the local economy. FIU is Worlds Ahead in finding solutions to the most challenging problems of our time. FIU emphasizes research as a major component of its mission.
Since 1960, the Miss Universe Organization and Miami have had a longstanding relationship, with the MISS UNIVERSE Pageant being held in the Greater Miami area 15 times, more than any other host city in the world. The MISS UNIVERSE beauty pageant is distributed to approximately 190 countries and territories. Contestants from around the world will be judged in three categories: swimsuit, evening gown and interview, as they vie to become the next Miss Universe. Gabriela Isler from Venezuela will crown her successor at the conclusion of the live telecast.
ABOUT MISS UNIVERSEThe Miss Universe Organization (MUO) is a Donald J. Trump and NBCUniversal joint venture which uses its global grassroots reach to empower women to be self-confident and strive to be their personal best.  MUO believes that every woman should be "Confidently Beautiful." The MISS UNIVERSE®, MISS USA®, and MISS TEEN USA® beauty pageants provide an international platform through dedicated partnerships with charities, sponsors, and brands around the world. During their reign, our winners are given the tools to personally and professionally enrich others by providing humanitarian efforts to affect positive change, all while developing their personal career goals. For more information, and to learn more about Miss Universe's official cause to raise awareness for HIV/AIDS education and prevention around the world, please visit: www.missuniverse.com.
For more information, visit: www.missuniverse.com; Facebook: www.facebook.com/MissUniverse; Twitter and Instagram: @MissUniverse; YouTube: www.youtube.com/missuniverse
ABOUT THE CITY OF DORALDoral, incorporated on June 24, 2003, is a city located in north-central Miami-Dade County, Florida, United States. Conveniently located just one mile from Miami International Airport and twelve miles from Downtown Miami, our City is home to approximately 50,213 residents and regularly hosts in excess of 100,000 people who work within the City. The City of Doral occupies a land area of 15 square miles, with a mixture of industrial and suburban. The City has been named Tree City USA for five consecutive years and received top honors in the state of Florida for its Parks & Recreation Department in 2014. Doral has a large number of shops, financial institutions and businesses, especially importers and exporters.   Doral is home to the World Golf Championships hosted at Trump National Doral Miami, one of the premiere golf resorts in the region. Described as the premier place to live, work, learn and play, our many assets provide for a superior quality of life in an urban center known for its commerce. Doral is home to thousands of immigrants from all throughout the Americas making it a prosperous and culturally diverse community.

SOURCE The Miss Universe Organization
Posted by Andre at 5:55 PM