Julia Morley (74), CEO of the Miss World Organization, was seriously injured in Haiti while being part of a charity mission in the country. Morley was visiting the a dilapidated orphanage in Port-au-Prince and the reigning Miss World, Megan Young. Upon their arrival, a group of children ran to greet Miss World when suddenly the second floor of the building collapsed. Morley, Young, and the children fell about 10 feet to the floor.

Miss World, Megan Young, and most of the children escaped serious injury but they were left shaken. Morley, on the other hand, was in agony and it was discovered that she had been seriously injured along with one of the orphans, Jonathan, who was also injured quite seriously. They were taken to a hospital in Port-au-Prince where the doctors found Morley had suffered a significant fracture high in her hip area. Jonathan's leg fracture could be repaired in Haiti but Morley's surgery was deemed to risky and she was flown to Miami where she had to undergo a 5 and a half hour operation. She will now have to stay in Miami for quite a while to undergo intensive therapy.

Morley explained what happened to www.missworld.com from her hospital bed in Miami:


“I heard a loud crack and then the floor started to slide. My first thought was for the children and Megan. As I fell through, I remember catching some of the younger kids and breaking their fall. I landed on my feet but with the extra weight of the kids I fell back. Then came the intense pain and I knew something was seriously wrong.


“I was so relieved that nearly everyone escaped unhurt. I stayed with poor Jonathan in the hospital. He was in the bed next to me and we cuddled each other while waiting for our X-Rays. I am glad to say that his leg has now been set and he will recover quickly.


“I will return to Haiti as soon as I am well enough. There is a lot of work still to do. I want to go back and see the kids and to check on Jonathan's progress. This terrible accident highlights the continued need to provide a safe environment for these young kids. Many of them were themselves orphaned as a result of buildings collapsing during the terrible earthquake of 2010.” 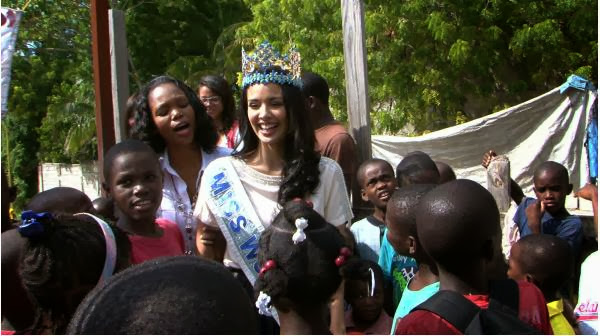 Young will continue her duties as Miss World. She is set to appear at fundraising activities for Haiti in the United States between 19 and 21 November. She also told the Miss World website what happened:
"We went into the orphanage hoping for a good day. I was happy that day and the children we were with seemed so full of energy and joy. We get onto this second floor platform, and we aren't even there for a minute and we hear a crack and everybody falls through.
"Nothing like that has really happened to me before. It was such a shock. I felt like a deer in the headlights. I didn't really know what had happened or what to do. We had all fallen down, but I was still on my feet. I had the crown in one hand and the other hand instinctively holding up one of the decks in place with two people. There were lots of kids under the decks still and we just instinctively held on. it was such a scary situation for me. it makes you realise there is so much more that should be done for these kids. it's not the only orphanage out here in Port au Prince, and I am sure others are in a similar state."
"We just hope that Julia recovers from it as quickly as possibly and dear Jonathan. My thoughts are with them at this time. It was a real eye opener and just shows how much work needs to be done in Haiti. I want to go back and continue with the work that we have started, and make sure nothing like this can happen again."
Eye For Beauty Blog salutes Julia Morley for her wonderful spirit and determination to do much needed work in Haiti. We send her lots of love and best wishes for a speedy recovery. Mrs. Morley, you are a true inspiration!
Special thanks to www.missworld.com
Posted by Andre at 8:41 AM