Miss USA 2014 will NOT be held in Florida


On Thursday, council people were called individually and were notified by a Trump representative that the 2014 pageant would be hosted elsewhere 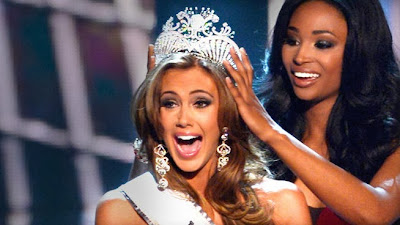 Council people in a Miami suburb said they were told by a Donald Trump representative that the 2014 Miss USA Pageant will not be held in their city because of political infighting and disparaging comments by the mayor.
Trump owns the Doral Hotel & Country Club,a large resort and golf course in the city. Once Trump bought the resort in 2012, the city entered into negotiations with his team about hosting the pageant, said Councilwoman Ana Maria Rodriguez.
But the recent controversy between City Manager Joe Carollo and Mayor Luigi Boria coupled with unwelcoming comments from Boria about the pageant, have prompted Trump to move the 2014 contest in Las Vegas, according to sources within the council.
So on Thursday, Trump's representative called each council member individually to relay the news. They were told that he will make the announcement from the Miss Universe pageant on Saturday night.
“That decision was made by Donald Trump soon after the motion by the city commission of Doral to support bringing the Miss USA Pageant to Trump Doral and the mayor was very clear that he spoke against it and voted against it,” said Trump spokesman Ed Russo “And we want to avoid awkward situations like this.”
Trump said he would reconsider bringing the Miss USA Pageant to Doral at some future time.
"The announcement for next year's pageant for the Miss USA will no longer be in the Doral resort which is what we were all anticipating," said Ana Maria Rodriguez. "We are now informed that it will be happening in another city in and in another location which is very disappointing. We have been working very hard to get this pageant to our city."
She added that an elected official said he doesn't want the pageant in Doral.
"The main reason is they don't want to have a pageant in the resort in a city where they feel the main person doesn't want them there--they are not welcome," she said.
Vice Mayor Bettina Rodriguez Aguilera said it was disappointing and that it would've been great to have the pageant in the city.
"We are really taken by that because this would be a very big economic downturn for Doral," Rodriguez Aguilera said.
She said it would've meant about $50 million for the city and the surrounding areas.
"The situation that Doral is going through right now and we have been in the press for the wrong reasons," she said.
Meanwhile, Boria said he is still hopeful about the situation.
"We don't know yet. We have to wait. I think we have be patient. Mr Trump make his ultimate word to us," Boria said.
Posted by Andre at 7:23 AM