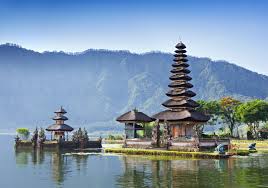 Indonesia said Saturday the final of the Miss World pageant later this month would take place on the Hindu-majority holiday island of Bali instead of near the capital, after days of Muslim hardline protests.
The announcement is the latest sign in the world's biggest Muslim-majority nation of fringe Muslim groups' growing influence on authorities and their power to stymie events they deem un-Islamic.
Last year, pop sensation Lady Gaga axed a concert after a series of protests, where radicals dubbed her "the devil", threatened to burn down the venue and criticised her for wearing only "a bra and panties".
Although the Miss World organisers had already promised to replace the contest's trademark bikinis with Balinese sarongs for its beach fashion segment, thousands have taken to the streets this week to denounce the decision to hold the contest in Indonesia.
On Friday, radicals burned the organisers in effigy and branded them "infidels".
The contest opens in Bali on Sunday and later rounds were due to take place in and around Jakarta, with the winner originally set to be crowned at a venue outside the capital on September 28.
The government said all events would now be held on Bali, where hardline influence is almost non-existent and where the Balinese are used to hordes of foreign tourists sunbathing in skimpy swimwear.
"All the events will now be held at venues in Bali -- it will all be concentrated in Bali, until the closing," coordinating minister for people's welfare, Agung Laksono, told reporters in Jakarta on Saturday.
He said the government had "listened to what the people wanted". The decision was taken in a meeting between Laksono, Vice President Boediono, and police and tourism ministry representatives.
His comments came after some 600 people joined protests Saturday on Java island, bringing along goats wearing Miss World sashes in Yogyakarta city to ridicule the event, while students in Java's Surabaya city held banners reading: "We are ready to die for the Miss World contest to be scrapped".
They join a human rights commissioner, government minister and mainstream Muslim groups who have all voiced their opposition to the event, many arguing it exploited women and was an export of Western hedonism.
Around 90 percent of Indonesia's population of 240 million people identify themselves as Muslim, and the vast majority practise a moderate form of Islam.
There was no immediate reaction from the organisers regarding the change of venue, but the British chairwoman of Miss World Julia Morley told reporters in Bali earlier Saturday that the contest would respect the local culture.
"In keeping with respect for this country, all the girls were happy to work together," she said.
"We didn't want to aggravate or hurt anyone."
Contestants were photographed visiting Bali's attractions, all wearing long-sleeved shirts or body-covering shawls.
The event will feature women from 129 countries, and has been touted by some authorities, including Bali's governor I Made Mangku Pastika, as free promotions for Indonesia's tourism industry.

I knew this was going to happen. They should never have gone to Indonesia at all. Nor should they go to any country like this ever again.
Posted by Andre at 11:37 PM