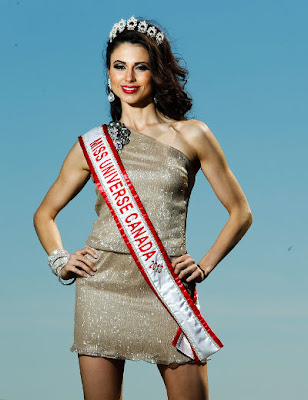 A mere 24 hours after she was named Miss Universe Canada 2013, 26 year old Denise Garrido had to make peace with the fact that her lifelong dream was being shattered. Garrido was crowned Miss Universe Canada at the conclusion of an event in Toronto on Saturday night (5/25) but one day later the organizers informed her that due to a "human error" that slipped in when the scores were calculated, she should not have been Miss Universe Canada. The organization released a statement clarifying that Riza Santos was the actual winner and Garrido should have been the 3rd runner-up. Santos will now take over the title and represent Canada at Miss Universe 2013.
Garrido spoke to the Canada's National Post: "When they announced that I was the winner — that I was actually going to be Miss Universe Canada — it is something that I had always wanted ever since I was a little girl. It truly was a dream-come-true moment. I was so happy.” Garrido continued to explain that one day later at 10 pm on Sunday night, the organizers met with her.
“It started out on a positive note,” Ms. Garrido says. “Then they told me there had been a miscalculation, that the wrong winner had been found and that the runner-up was the actual winner.”
Then they asked the aspiring doctor from Bradford, Ont., to hand back her crown. And her Miss Universe Canada sash. “It was shattering,” she told the National Post over her car’s speakerphone, while driving from her parents’ home in Bradford to Toronto. “I was sad. I was disappointed. And I was embarrassed, really embarrassed, because everyone back home had been celebrating. Getting over my own ego has been the hardest thing.But being angry would not have changed this situation.”
Ela Mino who was one of the top 12 finalists of Miss Universe Canada had the following to say to Eye For Beauty Blog: "Riza and Denise are both exceptional young women and either is deserving of the title. I think this is a difficult situation for both girls, especially Denise. She is handling the situation incredibly well given the circumstances. I don't know if many girls would be able to show the strength and grace Denise has shown in such an upsetting time. While I truly feel bad for Denise, I am so excited for Riza! I am really hoping she does well at Miss Universe! It is very difficult to comment on the situation because these two young women were both so kind to me and so lovely to be around."
Meanwhile, fellow contestant Marwa Ishow told the Toronto Star that this whole incident made her feel uneasy. She said Garrido deserved to win. “How we do we know that everything else wasn’t wrong?” said Ishow, 22. “The whole pageant seems like it was staged.” She continued on a post posted on her facebook account: "It's clear to me that after reading Denis Martin Davila e-mail that was just sent out to me that Denise Garrido is not Miss Universe Canada 2013 which is such a shame because no one deserved it more than that women and the only reason I had so much respect for the organization was because she won the title."
Another contestant, Barlen Zaro who was named the audience favorite and got fast-tracked to the top 20 at this year's contest gave the following comment to Eye For Beauty Blog: "I find it very sad and unfortunate for Denise Garrido - she deserved that title! If it were up to me, I'd leave it as is I know she would do so much for our country and for herself. She's won so many other competitions, was very free spirited, humble and a very pure woman in my eyes! I guess Denis Davila wants to be fair. So he crowed the winner Riza Santos who I hope will do well for Canada. When you think of a Miss Universe Canada you think of a role model - a strong beautiful human who will put a high name to our country (and that's really what we all saw in Denise)! I don't feel it's fair to bash Mr, Denis Davila though. He chose to do what's right and I still respect him as a man for coming out with this knowing it might hurt him or his name. Congrats to Riza Santos, I wish you well and to Denise Garrido: you are the winner in all our eyes!"
Garrido has since posted the following on her twitter account: "In every storm cloud there is a silver lining if you are willing to look for it." Eye For Beauty Blog would like to commend Denise for her class and grace. The way she has handled this shows what a wonderful lady and true role model she is. We can only hope that something good will come from all of this. In our eyes, she will also be a true queen and amazing human being! NO ONE can take that away from her!