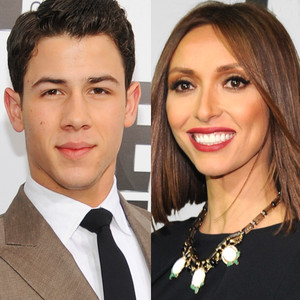 Nothing says America like a Jonas Brother and a member of Fashion Police.
NBC announced today that Nick Jonas and E! News' very own Giuliana Rancic will be hosting the Miss USA competition, airing live from Las Vegas on Sunday, June 16.
"We are excited to announce a veteran and a newcomer as hosts for this year's MISS USA Competition," Paula M. Shugart, President of The Miss Universe Organization said in a statement. "The diverse backgrounds of Rancic and Jonas in the entertainment industry will bring a new and exciting energy to the stage."

This will be Rancic's third year hosting the Miss USA pageant. Nick Jonas, a first-timer, will have his brothers Kevin and Joe there as backup. The Jonas Brothers, who will kick off their North American tour in July, are set to perform during the competition.

Article and photo courtesy of E!Online
Posted by Andre at 6:19 AM