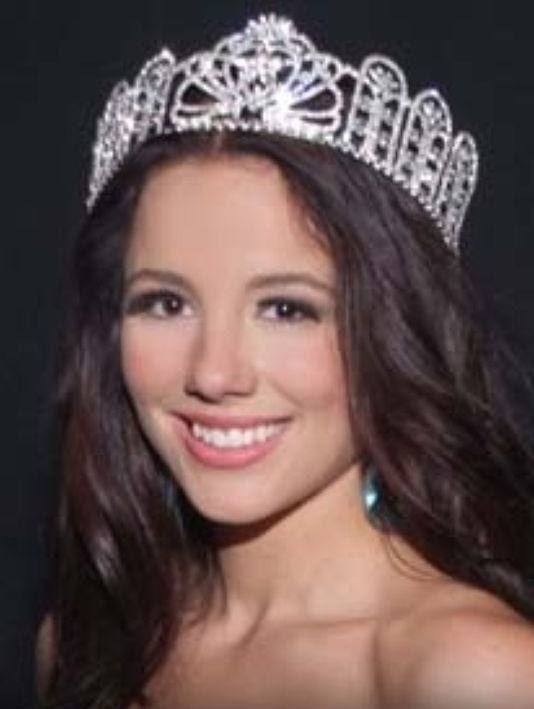 Melissa King is shown in a photo from the Miss Delaware Teen USA website.(Photo: Gannett)


WILMINGTON, Del. -- Melissa King, Miss Delaware Teen USA, resigned her crown on Tuesday after facing questions about an online sex video that claims to star her.
"I would like to confirm to you that the Miss Delaware Teen USA pageant has received a resignation letter from Miss King's attorney," pageant spokeswoman Dara Busch wrote in an e-mail this morning.

King, 18, who was crowned Miss Delaware Teen USA last year, declined to provide her attorney's name Monday. Pageant officials, however, identified her attorney as J. Gregory Hannigan of Hagerstown, Md. He did not immediately return messages.
An email sent Monday night seeking comment from the website that distributed the video was not answered.

Busch, who is executive vice president and managing director with Rubenstein Public Relations, said the runner-up will take King's position.
According to the Miss Delaware Teen USA website, Hailey Lawler of the Newark, Del., area is the runner-up. She could not be reached for comment.

Miss Delaware Teen USA is run by the New York-based Miss Universe Organization. This is not the first time issues have arisen with the organization involving a Delaware contestant. In 2005, Sheena Benton was allowed to remain Miss Delaware USA and compete in the nationally televised pageant after it was learned she had pleaded guilty for drunken driving in 2004.

And this is certainly not the first time there has been a sex scandal involving a pageant contestant. In 1984, Vanessa Williams gave up her Miss America title after nude photos of her surfaced. The Miss America pageant is not associated with the Miss Universe Organization.

The video, a recording running just over five minutes, starts with an interview on what appears to be a hotel bed. The woman does not give her name. But when the man, who is not shown or identified, interviewing her asks when she turned 18, she says "about three months ago. March."
King is 18 now, and her birthday is in March, according to the Miss Delaware Teen USA website.

The interviewer then asks her what made her want to do her first adult video.
"I thought it'd be fun and it sounded like I needed the money," the woman says. "So I just decided to do it."

When the woman acts reluctant to talk about it, he says "I'm not going to say the state or anything. ... You did beauty pageants?"
"I've done them, yes," she responds.

While King won the Miss Delaware Teen USA title in November, at the time this video was shot -- last summer -- she was the reigning Miss Teen Delaware International 2012.

The interviewer then asks her if she has told anyone about doing the video, to which the woman replies: "It's not a big secret. But I didn't tell anybody specifically what I was doing."
Following the interview, the woman and a man, whose face is never seen, perform several different sex acts.