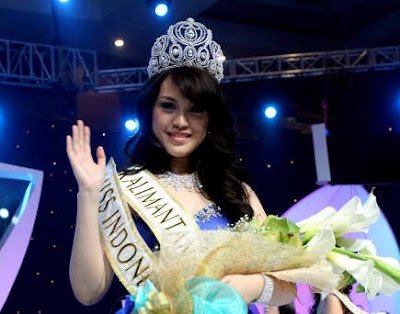 Vania Larissa (17) has been crowned as Miss Indonesia 2013. She beat 32 other delegates to win the title and the opportunity to be the host delegate of the 2013 Miss World Pageant which will take place close to Jakarta on September 28. Larissa also won the Talent fast-track. She stands 1.71m tall. The first runner-up was Miss Jawa Tenggah, Jovita Dwijayanti, and the second runner-up was Miss Java Barat, Shinta Nur Shafira Azzahra. The top 5 were completed by the delegates from Sumatera Utara, Yemina Putri Alma Lamtiur Hutapea, and Sulawesi Tenggara, Claudia Marcia.

Good choice. She's pretty and has potential. I'm sure we will see her in the top 15 (at least).

Photo: http://www.tabloidbintang.com/film-tv-musik/kabar/63959-vania-larissa,-miss-indonesia-2013.html
Posted by Andre at 10:21 AM