A venue can make or break any event and that's why it is crucial for any event planner, or in this case pageant organization, to select the best possible venue for their show. Let's take a look at the venues that were used in 2012:

The impressive Dongsheng Fitness Center Stadium was the perfect venue for a pageant of the scale and magnitude that could do justice to an organization that keeps on growing and improving. I must say that I was surprised when I saw the venue and happy flashbacks to the open air events in Bangalore and the Seychelles popped into my mind. When I saw what was built inside that stadium, I was a pretty happy fan.

Even though I am bored of seeing pageants hosted in Las Vegas, no fault can be found with the venue selected by the Miss Universe Organization. Las Vegas is one of the entertainment capitals of the world and PH Live (formerly known as the Planet Hollywood Theater for the Performing Arts) always makes a great venue. It is indeed the largest theater of its kind in the USA> 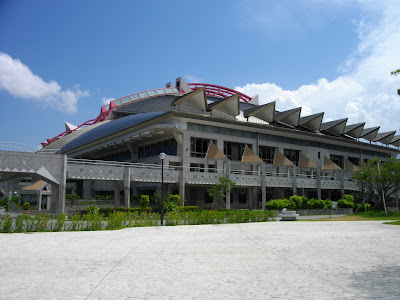 The venue selected for Miss International 2012 was a pretty smart, and I'm sure obvious, choice. I think it was the best possible choice as Okinawa does not really host many large events. Even though it could was not as large as the venue for 2011, it was still a pretty decent choice.

The venue for the Miss Earth Pageant was a mansion. No stop. Even worse the garden of a mansion. I don't even know how they even thought it was going to work. I even read reports that construction on the whole place had not been completed at the time of the pageant. Having it there, outdoors, was a very risky choice which did not pay off. In fact, it pretty much backfired. It was so windy that I almost could not watch the final telecast because it was just so frustrating to see the girls' hair blowing into their mouths.

* The Pageant Report Card is solely based on the opinion of the owner/editor of Eye For Beauty Blog, Andre Sleigh. It's just a fun way to look back at 2012 and put Miss Universe, Miss World, Miss International, and Miss Earth in unofficial competition with each other.