Miss Universe 2012: SHOCK! HORROR! The "impossible" happens!
For a few months after the middle of 2012, I started to think that there might not be a Miss Universe Pageant in 2012. The organization had desperately struggled to find a host for the pageant for the greatest part of 2012. There were rumors, rumors, and more rumors with Guadalajara, Mexico and Sun City, South Africa seeming to be the hottest "favorites" but neither of these two potential venues committed to hosting the event. Paying US$20 million or more to host is just impossible in this day and age, especially if the hosts have to bend backwards to meet the needs of the American network that broadcasts a show that is tailored for the American market.
After failing to secure Guadalajara and Sun City, the Miss Universe Organization set their sights on the Dominican Republic and made a proposal to their government. Eventually the government of this country rejected the proposal due to the current economic climate. Miss Universe was pushed back to December with more rumors that the show might even be postponed to 2013 or that a winner will be crowned in December and the next one before the middle of 2013. Finally, the rumors were stopped to the relief of the legions of Miss Universe fans in September 2012 with the news that the Miss Universe Organization's reliable back-up plan would once again happen, the pageant was scheduled to take place at the Planet Hollywood Resort and Casino in Las Vegas, Nevada on December 19, only days before the end of the year.
The December 19th final was the latest in a calender year the Miss Universe Pageant was ever held and that also meant that Leila Lopes from Angola (the 60th Miss Universe) became the longest reigning title holder in the history of the pageant. The Miss Universe Organization decided to embrace the holiday season in which the pageant would take place and they announced their plans to have a holiday themed Miss Universe Pageant which would include how Christmas is celebrated around the world. 89 young ladies, equalling 2011's record number of participants, would compete for the 2012 Miss Universe title with Gabon and Lithuania competing for the first time.
Fans around the world could not wait for their favorite pageant. Waiting for almost 1 year and 3 months before the start of the most anticipated pageant of each year was almost too much for fans around the world to handle. Miss Universe remains by far the most popular pageant with the most pageant fans who digest the organization and its title holders every move and for them, Miss Universe will always be no. 1, no matter what happens. The wait actually seemed quite worth it though because 2012 had one of the strongest groups of delegates in recent years. It was poised to be the battle of the super beauties, with the Philippines, Croatia, Venezuela, South Africa, Kosovo, Puerto Rico and Ecuador being the hottest favorites for the crown. 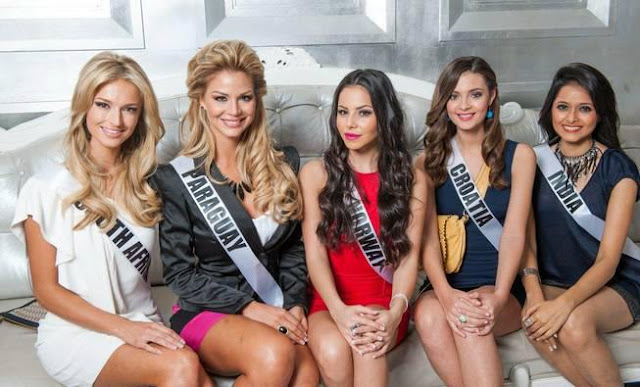 After all the home victories in 2012, most of us felt  robbed and most of us felt that Miss Universe would definitely not follow this trend. It was just unthinkable. The Miss Universe fans' script was already written: a super beauty would win and the Miss Universe Pageant would once again be used as a prime example of the fairest pageant with the best results when bashing the other two majors and their owners. Even though Olivia Culpo, Miss USA, was agreed by almost everyone to be a stunning beauty with an amazing personality who could just light up a stage, most people felt that her look was definitely that of the all American (stunning) girl next door, a typical  Miss USA but not exactly the look of a Miss Universe. So the consensus was that in a competitive year like 2012, she would probably reach the top 10 and with a bit of luck top 5 and most likely the fourth runner-up position. This belief was solidified when Culpo showed up in Vegas looking great as always, but a little tired and perhaps even a bit withdrawn at times. After the preliminaries most fans agreed that her quest for the crown would end in the top 10 round due to her very interesting choice of gown, a full red ball gown which did not do much to make her look taller than her 1.66m which is quite short in the pageant world.
Even though 2012 had a great bunch of delegates, a super favorite emerged with pageant portals and most fans around the world. One delegate did not really put a foot wrong in Las Vegas. Miss South Africa, Melinda Bam, spent the greatest part of 2012 living and breathing Miss Universe. She worked exceptionally hard to try and win her country's first Miss Universe crown since 1978. Bam's hard work paid off when she became the darling of websites and fans around the world. Every favorite also has her detractors. Some people did feel that Bam (at 1.7m) was too short to be Miss Universe and others felt that her look was a tad too mature. There were also some fans who disliked her nose. For the majority of Miss Universe fans, however, she was the one. The girl with the right balance of glamor, beauty, intelligence, personality, and charisma. Most of us felt the crown was hers to lose.
After the preliminaries, as always, some favorites faded and new favorites emerged. Bam held her own and cemented her status as favorites with two sizzling preliminary performances. Other favorites who held their own was Venezuela (although some commented on her over the top stage antics), Philippines (who saved the best for last), Mexico, Australia, Puerto Rico, Paraguay and Malaysia. Some of the previous favorites who somewhat disappointed during the preliminaries were Ecuador, Croatia, and Kosovo. El Salvador, Brazil, and Sri Lanka were definitely counted as some of the biggest surprises of the night.

When the big day arrived, all eyes in the pageant world were eagerly fixed on Las Vegas to witness the battle of the super beauties and the crowning of the one who we would be talking about for the next 12 (or 6 or 8 or 10) months. The stage was an explosion of Christmas with some fans loving it and of course others branding it as tacky. Pageant fans are very hard to please and for every positive comment, there will always be 5 negative ones. The thing with Miss Universe telecasts is that you always kind of know what to expect as they always follow the same format. Same thing with a different set of presenters and a different "cast". Even though the telecast was perfectly fine, a good production as always, it seemed like a more toned down affair and there were a few major glitches which we don't usually associate with a Miss Universe telecast, most notably the introductions of the first 10 or so delegates who were not heard introducing themselves. In general, the rest went pretty smoothly with the exception of one or two incidents.
Looking back at Miss Universe 2012, it is not the Christmas themed show, or the seemingly low budget production, or the hosts, or judges or nailbiting competition that will be remembered. 2012 will definitely be remembered for it's bizarre results from start to finish. Fans were in shock when the delegates from India, Turkey, Russia, and Peru came out of nowhere (well, we were all pretty surprised) to reach the top 16 ahead of favorites such as Puerto Rico, Paraguay, and Malaysia. Others in the top 16 who were deemed surprises (though not huge surprises) were France, Hungary, and Poland. Now, just like I said in my Miss World review, we can always come up with business reasons for some of the placements. Many people felt that India's placement was because the organization is looking for a new franchise holder in the country and Turkey because there is an interest in hosting the Miss Universe Pageant in the future. However, these are just rumors and they don't mean anything because there are no "rumors" to justify the placements of other delegates like Poland, Hungary and France (who was just a runner-up in her country's pageant)... so there will always be speculation among pageant fans but we the organization never releases the details about who made it in the preliminaries and who were their picks. So all these rumors and "pageant conspiracy theories" will remain just that. It was strange though that the winner of the fan vote was not named this year.