PRETORIA-born Miss South Africa Melinda Bam, 22, is so confident she will be crowned Miss Universe in Las Vegas next month that she is planning how she will carry out her duties, which would include visits to more than 30 countries and working with charities across the world.

The blonde said she had set her mind on winning the prestigious pageant, which is backed by billionaire Donald Trump, one of the world’s richest men.
“My mind is already past the competition, my mind is already in my reign as Miss Universe. Anything that you can visualise in your mind, your body can achieve because your body doesn’t necessarily know the difference between visualising something and actually doing it. So the more I visualise everything I want to achieve, the more I know it’s possible,” she said.
“My grandfather told me when I was a little girl that, ‘You’re not a product of your circumstances, you’re a product of your choices’. So as long as I choose to be positive, I will always be rewarded for it.”
Bam was speaking to the Pretoria News from the home of her personal stylist, Werner Wessels, where she was beginning the first phase of packing for the trip to the US later this month.
One of the prizes of winning Miss Universe would be to run a business, and Bam said she was ready for it.
“I can take on any business opportunities that come my way on top of Miss SA and Miss Universe, because I have my degree, which shows that I am a businesswoman as well,” said Bam, who has a BCom from the University of Pretoria.
Asked if she did not fear Miss Venezuela snatching the prize, she said, “I don’t think they are that strong this year. But you have to go into a competition with that ‘I want to win’ attitude and believe that you have what it takes,” she said.
“I’m not going in half-heartedly and I’m not afraid of anyone or anything.”
Bam’s personal brand strategist, Haydee Antezana of Professional Impressions, added: “In Africa when you wake up in the morning, you must wake up like a gazelle – running. Otherwise you will be eaten up alive” – a reference to the fight for the crown on December 19. 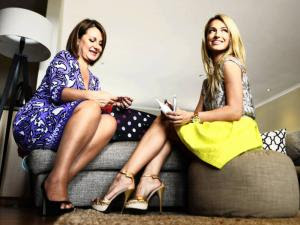 Changing from a red evening gown into a yellow-and-gold day outfit that she said was her “favourite”, Bam said the bright yellow was among her chosen colours for her brand and personality, while the detail on the gold top was representative of the country’s minerals.
Bam, who admitted she hated packing, said her wardrobe would be filled with local designers’ ensembles.
Antezana, who has worked closely with Miss SA winners for 10 years, gave Bam tips before her busy US schedule.
The pageant runs over 17 days, so the 20 or so pairs of shoes and 20 dresses are essential.
And anyone thinking of helping Bam with her luggage better think again – her suitcases are expected to weigh 100kg.
In addition to handy tips on how to save luggage space, keep her dresses uncreased, and how to fold her garments, Bam has also received instructions on how to conduct herself among other contestants, what to wear, and when.
Antezana said Bam’s wardrobe was not yet complete. Bam needed a fashionable white blouse, more off-the-shoulder dresses, brightly coloured garments, and an evening coat for the US winter.
With her reign almost over, Bam said she had seen some girls with potential to succeed her on the Road to Miss SA reality TV show, which follows entrants in the run-up to the crowning of Miss SA 2012 on December 9. Bam would not say whom she was favouring. She said she wanted the most deserving girl to win and would be open to mentoring them.