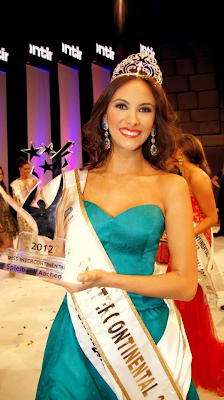 21 year old Miss Venezuela, Daniela Chalbaud, won the title of Miss Intercontinental at the conclusion of the 41st Miss Intercontinental final in Aachen, Germany last night. She stands 1.75m tall and will now represent the WBO (World Beauty Organization) for the next year. Chalbaud was also awarded the title Queen of South America. She was crowned by outgoing queen, Jessica Hartmann from the USA. The first runner-up was the Queen of North America, Miss Puerto Rico. The second runner-up was Miss England, Queen of Europe, and the third runner-up was the Queen of Africa, Miss South Africa. The fourth runner-up went to the Queen of Asia, Miss Thailand. The delegates from Turkey, Latvia, Belgium, Spain, India, China, Colombia, Bolivia, the Dominican Republic and Costa Rica completed the top 15.
Not a fan of the new winner. She pales in comparison to last year's stunning winner. Misses Puerto Rico and Thailand were robbed. The top 15 were also quite shocking. One of the worst top 15s I've ever seen. Some delegates who I would have placed in the bottom 5 made it all the way to the top 15.
Posted by Andre at 6:28 PM