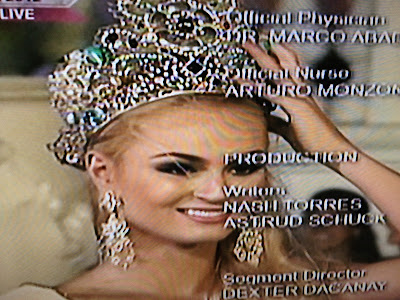 The new Miss Earth is 23 year old Tereza Fajksova from the Czech Republic. She beat 79 other delegates to become the 12th Miss Earth. The 1.8m stunner was crowned at the conclusion of an event held at the Versailles Palace close to Manila in the Philippines. She will now represent the Miss Earth Organization, Carousel Productions, for the next 12 months.

The home favorite, Miss Philippines Stephany Stefanowitz was named Miss Earth Air (which many people see as the runner-up title).
﻿
The Miss Earth Water title went to Miss Venezuela, Osmariel Villalobos. Miss Earth Fire is Miss Brazil, Camila Brant. The two titles are commonly regarded as the 2nd and 3rd runner-up positions. The Miss Earth Organizers insist that the elemental titles are equal.
The top 8 were completed by the delegates from South Africa, Russia, Nepal, and the U.S.A.
﻿﻿
Germany, Korea, Italy, Mexico, Scotland, Costa Rica, Poland, and Japan completed the top 16. One of the biggest shocks of the night was the exclusion of mega favorite, Miss Thailand.

Finally!!!!!!! They crowned an absolute stunner. I love her. She did not know the answer but her beauty was just too hard to ignore. She is a very, very worthy winner. I will be looking forward to following her reign. Not happy with Philippines being second. She should not have been in the top 4. Venezuela and Brazil were gorgeous. South Africa or Russia could easily have replaced Philippines in the top 4. There were many shocks in the top 16. So many stunners were left out but at least they got the winner right. Well done, Tereza Fajksova and the Czech Republic!!!
Posted by Andre at 10:35 PM