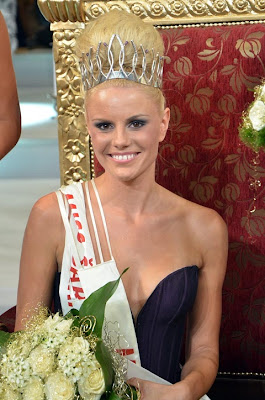 2012 will definitely go down as the year of dethronements and resignations in the world of pageants. This trend continues with the winner of Miss Serbia 2012, Nikolina Bojic, who announced that she will resign her title as Miss Serbia 2012. Miss Bojic recently became the subject of controversy when it was rumored that she was secretly married to a Canadian tennis player and had posed for some provocative photos. Furthermore, she also appeared to be too old to participate in the Miss World Pageant next year. The Miss Serbia Organization will now decide on a new winner for the pageant. The new Miss Serbia who will represent the country at Miss World 2013 in Indonesia will be announced this Sunday.

Photo and information: http://vnmedia.vn/VN/khong-ten/van-hoa/28_318695/hoa_hau_serbia_bi_phe_truat_vi_ket_hon_chup_anh_nong.html
Posted by Andre at 9:57 PM