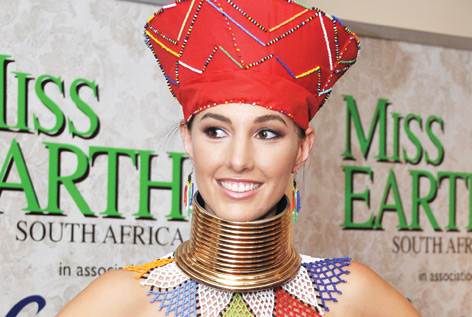 Miss Earth SA says although saving the world is important, she’ll settle for ensuring there is a world to save.

Dressed in an African-inspired frock in the colours of the rainbow nation Tamerin Jardine is off to the Philippines to join her counterparts in what can be described as a meeting of green minds.

“I am looking forward to getting to know the other ladies from various countries and experiencing the culture,” said the 25-year-old lawyer, environmentalist and passionate animal rights activist.

Jardine will represent South Africa among 100 international delegates from around the world this November as she takes part in the 13th Annual Miss Earth, a competition that has made its mark.

During her stay in the Southeast Asian country, Miss Earth SA will focus on her term’s motto, “sustainable energy being the creation of enough energy for all, forever”.

“Renewable energy is an important natural resource, and sources such as rain, wind and the sun should be used rather than coal mining,” said Jardine.

South Africa is one of the world’s leading coal producers and is still largely reliant on coal-fired power stations for its electricity generation. As the economic hub of Africa, it is the country’s responsibility to ensure long-term plans for the use of sustainable and renewable energy that is available to all its people.

Jardine said that a vital piece of this puzzle is the education of the youth on these issues to sustain the message and it isn’t just a phase.

The holder of a BA in Law and an LLB also has the ultimate goal of changing people’s perspective of the legal system.

“One of my greatest wishes is for the right to life be extended to animals, but I believe if this had been done when we were fighting for basic human rights, it would have been much easier,” she said.
Photo and Article: The New Age Online, South Africa
Posted by Andre at 8:51 AM